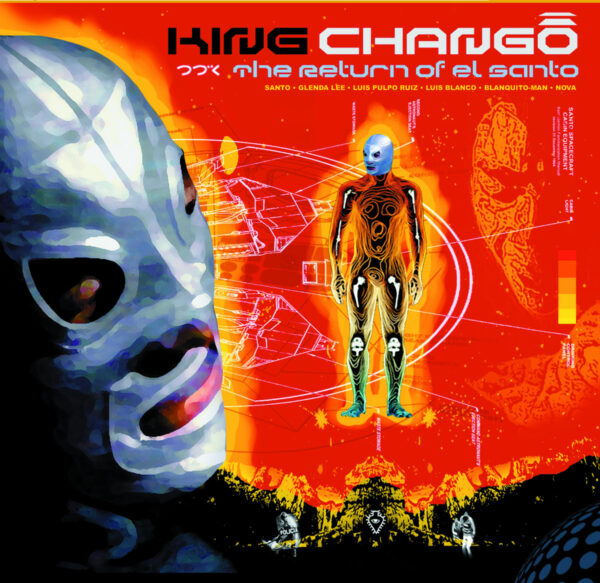 Now, with the Return of El Santo, King Chango — named for the Afro-Cuban god of war — pay tribute to another Latin bruiser with a new musical vision. Like radioactive embryos in the petridish of New York, King Chango have gone godzilla size. Leaner and meaner, streetwise and funky, encompassing the full plate of pop culture from trip.

You say you like it RAW? You think you know what the New World Order is all about? Well you’ll wanna grab a seat ringside when New York’s Latin alternative ambassadors, King Chango, spice up the rock ‘n’ wrestling connection with The Return of El Santo! Led by irrepressible frontman Andrew Blanco, King Chango step into the ring in tribute to Mexico’s wrestling superstar, the masked warrior known as El Santo, with their first album in three years — and a sound so energetic and fresh we don’t need no little chihuahua dog to sell it.
From their birth on New York City’s mean streets, King Chango quickly established themselves at the top of Latin rock’s international heap with their 1996 Luaka Bop debut. Their mix of hard-charging ska, Latin rhythm, and roots reggae converted virgin audiences into true believers from Venezuela to Mexico, Spain, and Japan; “Melting Pot” the single and video off of their first album saw regular rotation on MTV Latino and M2.